Yesterday, I dropped off my 2013 Subaru Outback at the dealership for what I hope is the last time. It consumes oil and fits the profile of a small group of cars built that year that have this issue. Luckily, I’ve stuck to the manual and done all the appropriate service stuff so that this will be handled under warranty. Since the issue started, I’ve gotten to know the service staff at my local Subaru shop pretty well. First name basis, and regular checks on each others’ kids have become the norm. I bought this car in 2012 after 3 or 4 years of tracking the new body style and the declining health of my previous car.

In researching the Outback, I thought back on the history of cars I’ve owned so far, and it was a little surprising how many there were in retrospect. Some met with calamity, some died of old age, and some were just no longer useful. I’m not particularly hard on vehicles, but maybe I just have bad motor karma.

Here’s the list of cars, along with my memory of why I got them and why I got rid of them:

1981 Volkswagen Rabbit (tan): My first car. 5-speed, so learned to shift just after learning to drive. This thing had lots of miles on it, but there was also something wrong with the motor from the start. I had been saving up money to get a car and it was all I could afford, so it never got the attention it probably needed. Struts were shot very quickly after buying it, but that didn’t stop me from driving it to the quarry for some off-roading. Overall, this was a great car for learning about how engines and suspension are supposed to work. A cautionary tale, if you will. I also learned how to do reverse FWD cookies in this car, drag raced it against another Rabbit in the high school parking lot, and ultimately crashed it after the rear end got loose on a massive sheet of ice. Bad conditions + bald tires = calamity. Interestingly, the Chevy Suburban who hit me (I ended up in his lane – he had no options) had to be towed (broken radiator) but I was able to drive the rest of the way home.

1981 Volkswagen Rabbit (green): Having pity on me for the numerous issues with the first car, my folks chipped in for this one. I needed a way to get back and forth. I don’t remember much about this one – can’t even remember why I got rid of it, but I assume it had worse motor troubles. Our neighbor behind us just happened to be selling his 1980-something Datsun/Nissan (Sentra?) and gave me a deal.

198x Datsun/Nissan Sentra (silver): This was my first experience with getting scammed. Interesting that it was our neighbor who perpetrated the bad deal. This car had lots of hard miles on it, but the price was right, so I lived with it for a few years. I don’t think I was ever able to rid the interior of the after shave smell our neighbor left on the stick shift or the steering wheel. At a point, I realized why he got rid of it when it started having trouble delivering gas to the motor. A new carb for this P.O.S. was $700, and since it was an import, there was no skirting it. A used one was $500. I think I paid $900 for the car. Sold it while it didn’t even run. 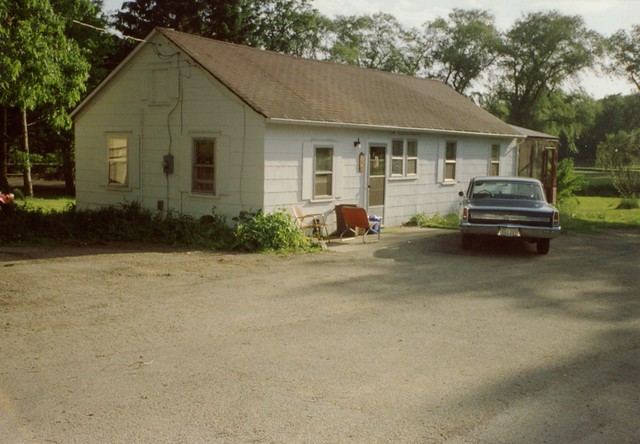 1966 Chevy II Nova (navy blue): My favorite car by a long shot. Found it in one of the car magazines at the front of a grocery store. Bought it from a nursing student near Comiskey Park who was having trouble parking it all the time (no power steering). It was a 4-door, 2-speed, straight-6 utilitarian commuter with bench seats. I could fit my drums in the trunk and back seat with ease, plus two people. My dream was to eventually clean it up and add a trailer hitch and a nice stereo. But then I left the color-matched, fitted gas cap at Bockman’s (when they were still a gas station), the rear quarter panel got smashed in while parallel parked in downtown DeKalb*, and ultimately, the entire rear end of the car got totaled by a drunk driver, mid-afternoon, while the car was parked off the shoulder, awaiting a tow (fuel pump died). The officer on the scene said it was a 55 MPH collision, and yet all four doors still opened. That was the final straw, and after talking to my insurance agent about what the car was worth before and after that last wreck, I sold it cheap to a friend who was building a similar car. Before all the accidents and other stuff, it was easily the coolest car I have owned.

1991 S10 Pickup, Ext. Cab (white): Another great Chevy in my past. This truck was small, but with the extended cab and full-sized bed with a cap, was the perfect vehicle. It also had a V6, but smaller and more fuel efficient. And in the peak of my rock star halcyon days, it was the perfect cover. Where I had been pulled over just for having long hair in the Nova, I never once caught a second glance in the retiree-mobile. Plus, I could fit a twin mattress between the wheel wells in the back, so after a show, I always had a backup plan if I was too drinky to drive. All that came to a sudden end when I hit an icy patch (again) and slid into the open tailgate of a pickup hauling sand (and not going at a green light), thereby shearing into the motor and totaling the car. It’s possible that had I not crushed it, I could still be driving that car today.

1993 S10 Blazer (dark green): This is still my second favorite car. On the heels of the pickup, I wanted something similar, but with a back seat. The Blazer was very similar to a larger, 4×4 version of the pickup, so there was no learning curve. Also, it had a killer motor (4.3L V6) and the stock stereo worked great. For my new job, which took me all over the Chicago area, it was impractical but ideal. There was never a time where I felt trapped in traffic, and weather was no longer a hindrance to travel. On the other hand, it was not built to be a commuter car, and eventually, the heater core died, all the oil fell out, the PCV valve crippled it, and the price of gas came onto everyone’s radar. When the price of fixes outweighed the thought of a car payment, we decided to trade it in.

2001 Honda Civic (black): This car, while very nice and well-appointed for the price, was not a good transition from the Blazer. It missed everything I liked about the Blazer and couldn’t fit me with three other average-sized adult men comfortably. I don’t remember what my plan was for hauling drums, but it was clearly short-sighted. Having seen the new-ish BMW X5 launch event, and also having visited a Saturn dealership with a friend, I was more open-minded about the brand new Vue they were about to launch. In fact, I talked to a salesman and learned that not only were they very roomy inside, but also quite affordable. So, we were able to trade the Civic in on what ultimately became my most practical car. 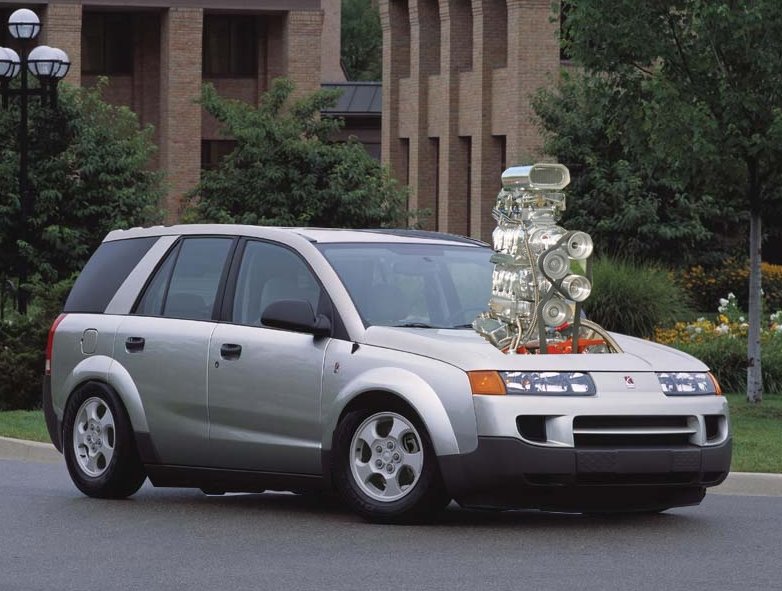 2002 Saturn Vue (silver): Technically, this was my second brand new car, but I don’t really count the Civic. The Vue was engineered differently than other cars at the time. It was the first iteration of a platform that GM would eventually use for the Equinox, the SRX, and a slew of others. It rode like a car – center of gravity felt low – but had the interior space of a utility vehicle. The back seat was comfortable and also folded down flat – plenty of room for all the drums. More than once, I was able to fit a full sheet of plywood inside the car to drive it home. That’s impressive. FWD meant it typically got 28 MPG in general, so it was practical. Also, I didn’t have a major issue with the car for 10 years, which seems unheard of these days. 5 years without payments or significant repairs. Near the end, though, while closing in on 150K miles, a cylinder dropped out and while it was repaired (but never quite the same), it had done damage to the already old catalytic converter. Based on any car buying guide, a replacement catalytic converter (parts alone) would be more expensive than the retail price of the car. Plus, we had a new baby, and I didn’t want to take chances.

2013 Subaru Outback 2.5i Premium (graphite gray): I had been looking at the Outback since Subaru updated the look in 2009. They made it more roomy in the back seat and I liked the overall aesthetic of the car. I also wanted something that would handle like the Blazer in adverse conditions. There was an option for an upgraded stereo, but the standard one sounded great in the showroom. I could save $2000 by getting a manual transmission. I saved more by not bothering with a sun roof. Ultimately, after an afternoon in the dealership, I got the price and payment I wanted with an extended warranty to boot. So far, barring the oil consumption issue (not insignificant), it’s my dream car. Without the oil issue, it might have already landed in my number 2 spot. I’ll need to drive the Outback 8 more years to beat the reliability of the Vue, and retrofit a turbo to rival the speed and ass-kicking factor of the Blazer. The Nova is nearly mythical in my mind; it’d be hard to beat for the number 1 spot.

Jennie will get the next new car, so I hope the Outback can be what I originally expected it to be after the motor is replaced. At the end of this run, though, I’d really like to get a 1970 Monte Carlo – assuming gas engines are still legal by then.

[Aside: There’s a Dodge Omni somewhere in there, too, but I didn’t count it because it never ran. An erstwhile former roommate left it behind and sent me the title rather than getting it running and moving it himself. Then, I started getting tickets for the non-running car, so it wasn’t much of a gift, and it didn’t come close to covering what he owed me (and quite a few others). Got $35 for it at a bone yard down the street.]

* = While I was inside a restaurant, the car was parked on the street, 3rd in a line of 5 cars. Somehow, someone twitched or lost control for enough time to pick my car out of the lineup and smash into it. They took off, too, but a guy on the sidewalk left me a note with the license plate number and his phone number (he said he was a lawyer, would be willing to witness in court). I presented it to the police, and the cop came back and told me it was a young woman living in student/parent housing. He said she was very apologetic. I dropped it. I was broke, too, but didn’t have a kid to feed. Just a few months later, the car was destroyed, anyhow. I feel like the Nova was doomed, but offered the chance for some good karma more than once.